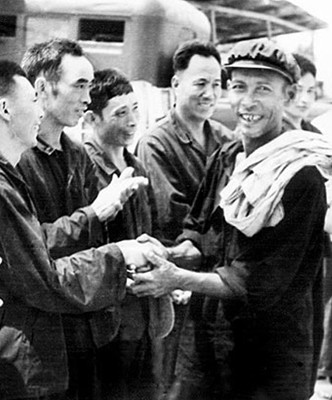 When it comes to the and the Cambodian genocide, the name most people know is Pol Pot. The actuality was that a regime and insurgency so repressive and obsessive needed a number of moving cogs. Ta Mok was an essential cog in the  and its aftermath.

Ta Mok (Khmer: តាម៉ុក; born Chhit Choeun ឈិត ជើង, 1924 – July 21st, 2006) was born the eldest of 7 children to a prosperous family in Pra Keap village of Chinese-Khmer decent. At 16, he initially became a Buddhist monk, before getting involved in the anti-French residence, later joining the Khmer Rouge.

In the late 1960’s he became the Chief-of-staff of the Armed forces, a general and a member of the standing committee of the Communist Party of Kampuchea.

During the time of Democratic Kampuchea as head of the military, he was critical in helping to orchestrate many of the purges that swept through the Khmer Rouge, as well as massacring 30,000 people in Angkor Chey district, which earned him the nickname “the butcher.”

He was also elevated to being “Brother Number 4”, which in Khmer Rouge terms meant he was 4th in charge, Pol Pot being Brother Number 1.

Ta Mok After the Fall of the Khmer Rouge

In many ways, the zenith of Ta Mok’s career was to come after the fall of the Democratic Kampuchea government when the Khmer Rouge second insurgency began.

In 1985 (officially at least), Pol Pot retired from the leadership of the movement to be replaced by Son Sen, with Ta Mok regaining control of the most powerful element of , the National Army of Democratic Kampuchea. The Communist Party of Kampuchea was also morphed into the Party of Democratic Kampuchea, which officially at least disavowed communism and ran on a Democratic Socialism platform. It was led by the “polite face” of the Khmer Rouge Khieu Samphan.

Ta Mok After the Peace Process

Following the peace accords of 1993, the Kingdom of Cambodia was restored, and the Khmer Rouge briefly made a new political party to take part in elections. The Party of Democratic Kampuchea duly became Cambodian National Unity Party and were expected to take part in the elections of 1994.

Alas, this was not to be the case, and the Khmer Rouge declared a rival government, the Provisional Government of National Union and National Salvation of Cambodia, which whilst unrecognized controlled around 6% of the country including Pailin and .

Officially at least the government was led by Khieu Samphan with Son Sen as his deputy, but things were about to get shaken up.

Infighting Within the Khmer Rouge

In 1996 Ieng Sary defected to the government, thus gifting Pailin back to Cambodia, with the rest of the Khmer Rouge retreating to their heartlands of Along Veng.

This led to Pol Pot ordering the assassination of Son Sen and Ta Mok, fearing both were also going to betray him. Son Sen and his family were brutally killed and buried in a mass grave, but Ta Mok not only survived but had Pol Pot arrested and assumed leadership of the remains rump Khmer Rouge state.

Showing a lot more mercy than Pol Pot had shown him, he had the former leader of the Khmer Rouge placed under house arrest before he eventually  of natural causes on April 17th, 1998.

In 1997 Ta Mok and Pol Pot were interviewed by Nate Thayer. In the interview, Ta Mok chuckled as they debated if the regime had killed millions, or merely hundreds of thousands.

On July 22nd, 1998, the provisional government was finally dissolved by Khieu Samphan and Ta Mok.

As opposed to the other defectors who had been granted royal pardons, Ta Mok fled to Along Veng with army loyalists and stayed on the run until being captured on March 6th, 1999. At the time, he was the last senior Khmer Rouge leader at large.

He was eventually charged with crimes against humanity but died of natural causes in 2006.

The overall legacy of the Khmer Rouge being a bad one would be a slight understatement, but it is also not as simple as that, particularly in the areas that remained under KR control until the end.

In Anlong Veng, the Ta Mok family not only reside but in comparison with other members of the Khmer Rouge who stayed there is held in somewhat high esteem. His townhouse has been well preserved and is the only “proper” tourist attraction in the area.

His memorial is also quite ostentatious and ironically located within spitting distance of the mass grave of the Son Sen family.

When you talk to locals (mostly ex KR and their decedents) about Ta Mok, they will admit that he did “bad things” and remember him as the person who brought economic rejuvenation to an area previously only extremely poor, but ignored by successive central governments. Of course, there is also the legendary “Ta Mok lake,” whereby he floated a wooded area so that he could have water next to his house. A bit of an ecological disaster, but in some ways quite a nice addition to Anlong Veng.

When you compare the relics related to Ta Mok with those of Pol Pot, the differences are incredibly stark.

Of course, they now have a dark tourism industry related to Ta Mok and the rest of his cohorts. Many may look down on dark tourism sites, but for many around the world, they provide economic opportunities that would otherwise not be there.

The Role of Video Games in Driving Consumer Demand

An Overview of Health Promotion Surveys